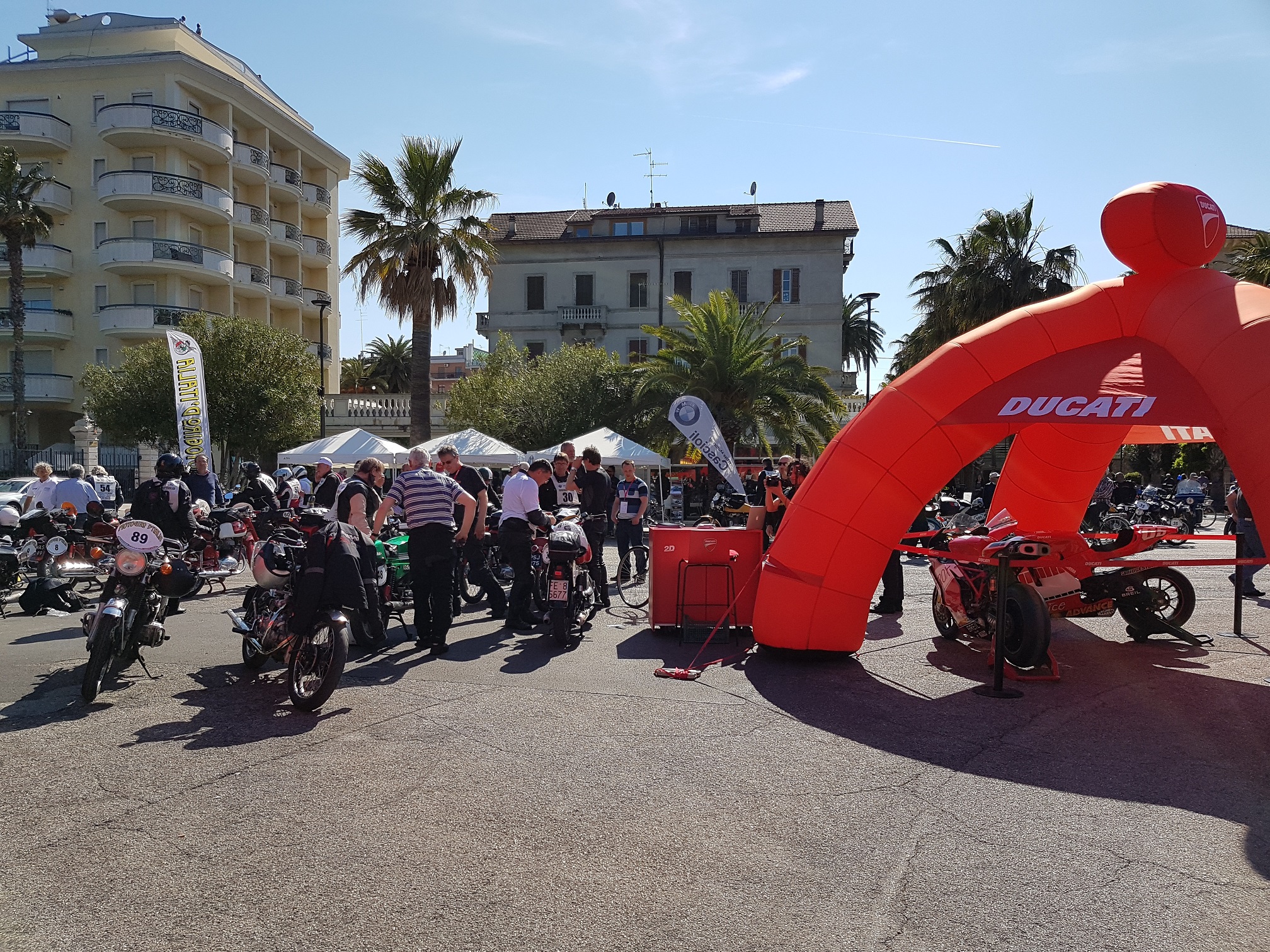 So after being in the saddle for two solid days, needless to say it was another good nights sleep but I woke to a wonderful view out of the hotel window out across the Adriatic Sea. Down for a good breakfast and then we decided that we would give the Velos a bit of a check over seeing as we hadn't needed to touch them yet. Neither bike had lost any oil and didn't require any topping up as the level was still ok, however I drained a small amount of excess from my Primary chaincase. I thought that the temperature in Italy would've cause the oil to be quite thin with running all day but the Morris Goldenfilm SAE50 was a good choice as I normally run with SAE 40 at home in the UK. Bill had gone with Morris Goldenfilm SAE20W50 in his bike and again this was working very nicely indeed. As we were doing a big loop for todays run, there was no need to pack up the suitcase. 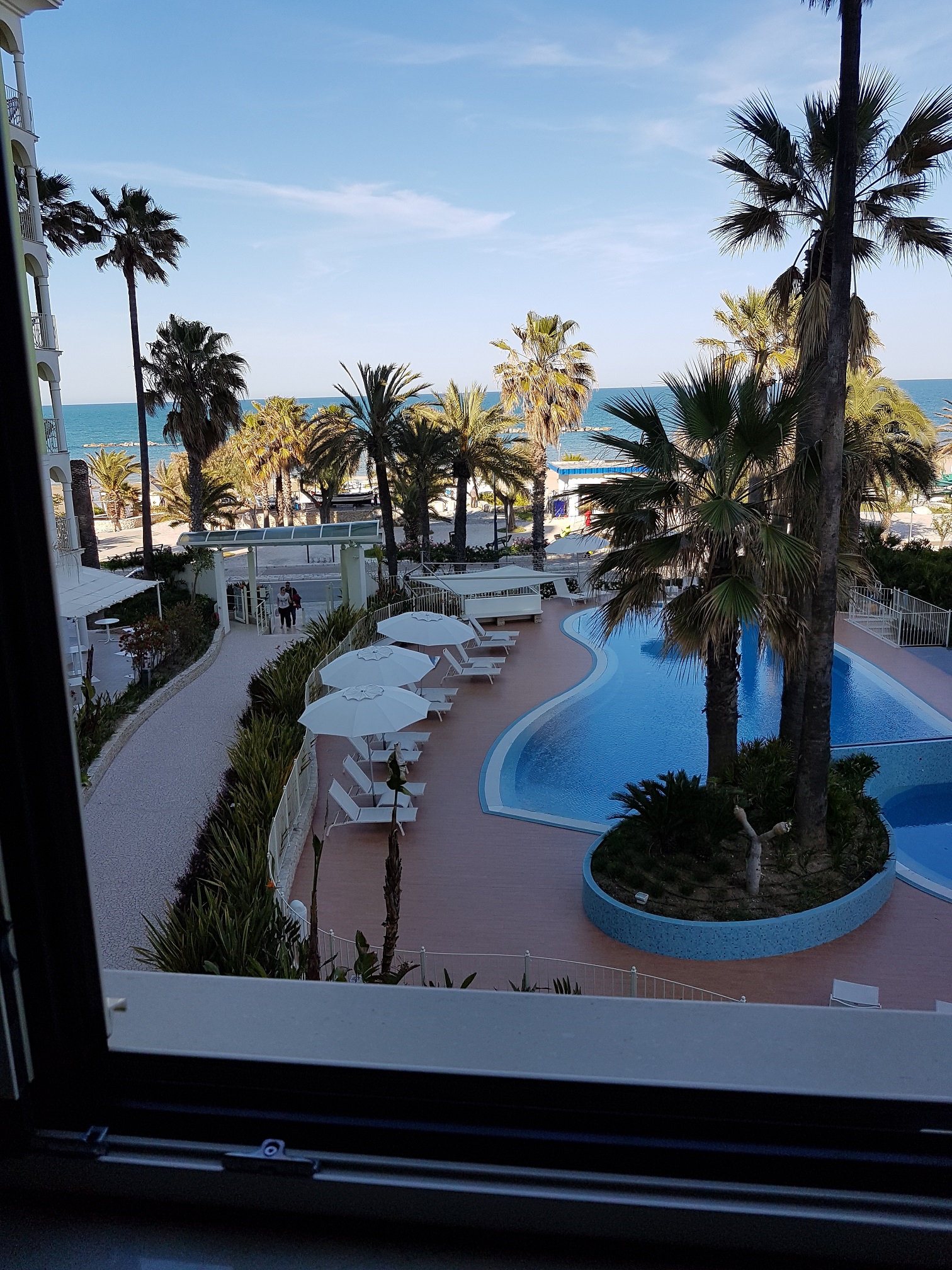 Oh I haven't mentioned yet about the hotel arrangements and what to do with all your gear. The Hotels are all part of the whole Giro package that you sign up for, so no need to look for your own accommodation at each place we end up in during the week. The Hotels are of a good standard and breakfast and evening meal are also included in the hotel package. Your suitcase is transported by the Motorclub staff to each hotel, so you don't have to worry about that, you leave it in reception each morning and it is there at the next hotel when you arrive. Each evening, the organisers encourage us all to get together by having the evening meal together in the hotel you are staying at that evening. This is a good chance to swap riding stories, bike craic, show off scars and also the best part for me, learn the format and rules about the timed special stages!! It also gives the main orgainsers, Massimo Mansueti and Laura Cosimetti of Motorclub Terni the chance to speak to everyone all at once and discuss the days riding plus any information about the next day. More important than that which gets everyone excited is when the days time sheets are put up on the wall and everyone scrambles to get a chance to see how good, or bad!, they had done that day and where they were positioned in the race and their individual classes. When you sign up to the event there is the chance to either form your own team or join up with others, we were part of Team Hunt, which was organised by Andrew and Claudia Hunt in the UK before we set off. A big thank you to you guys for all your help and advice before the event.

So time to get going on Day 3. like I said it was a big loop out into the countryside, so we headed off two at a time from the start after completing the first 'special stage', heading north along the coast towards Ancona. The first stop early in the morning was a wonderful vineyard, but it was too early in the day to try the wine for me!! 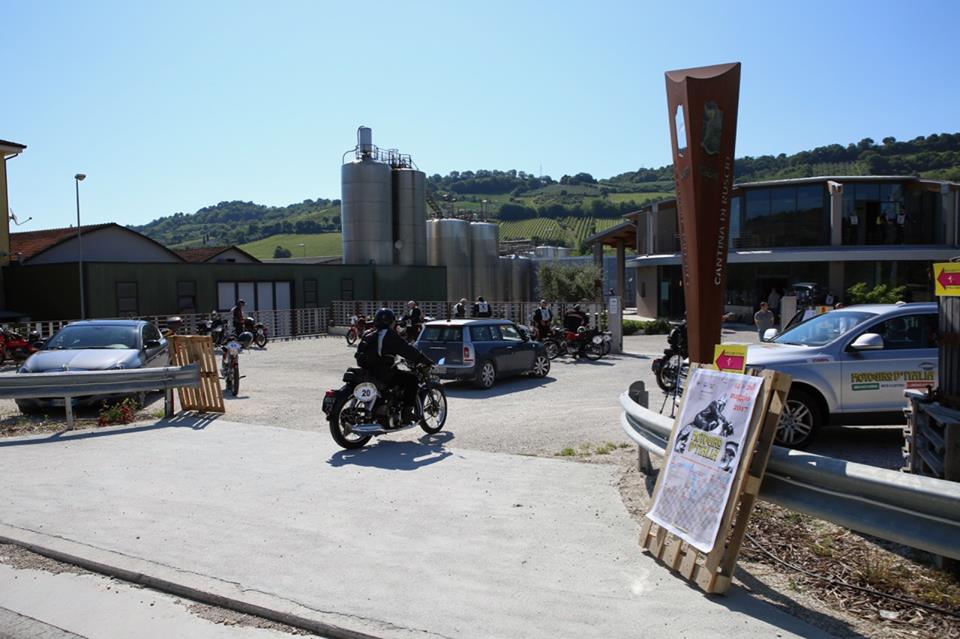 The second stop was at Loreto where we had chance to look around some of the building and the Church in the main square where we stopped for food and drink. 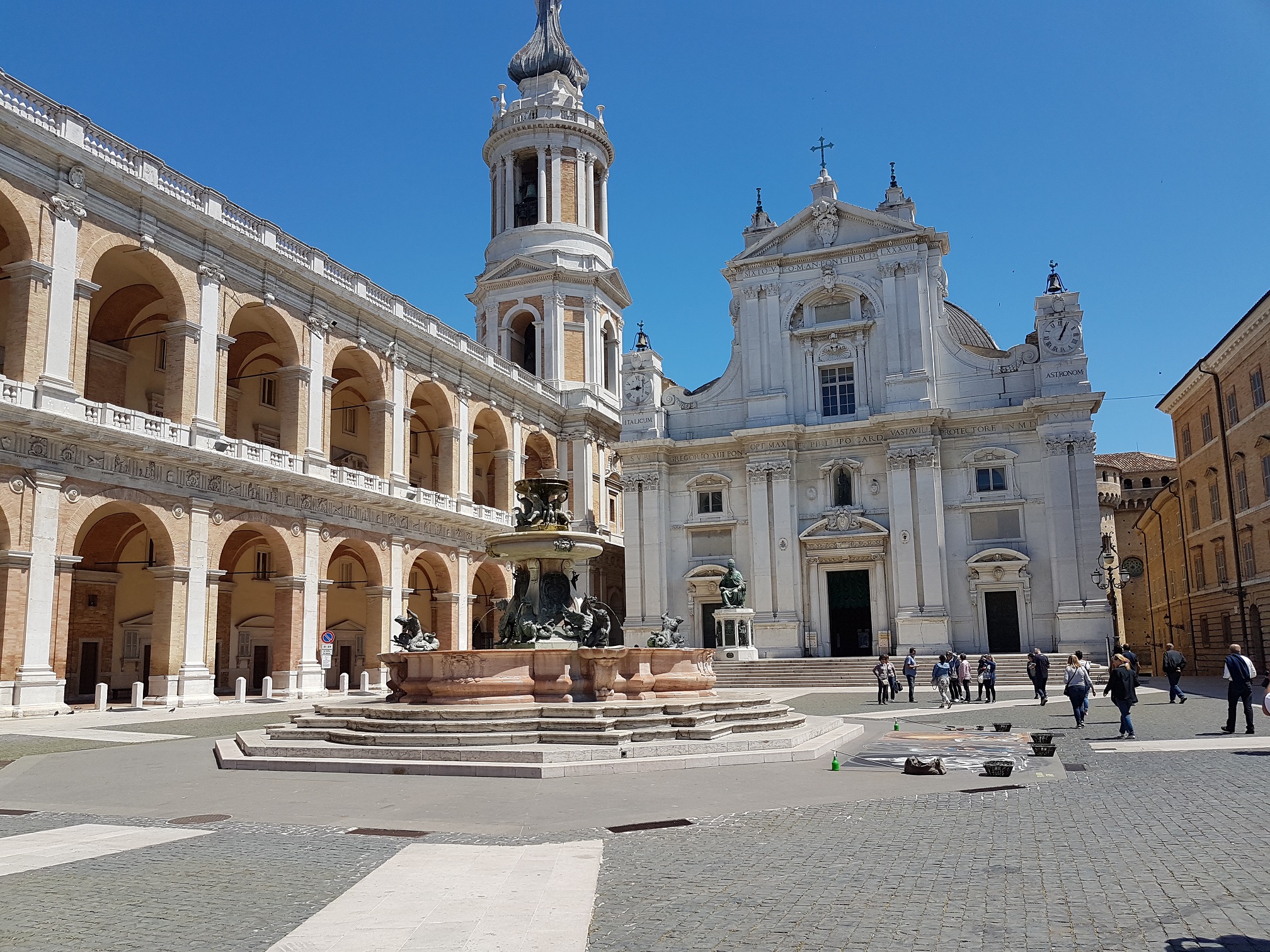 Heading inland from this point, I was just still amazed how little traffic there was away from the big towns and the road quality was just superb. 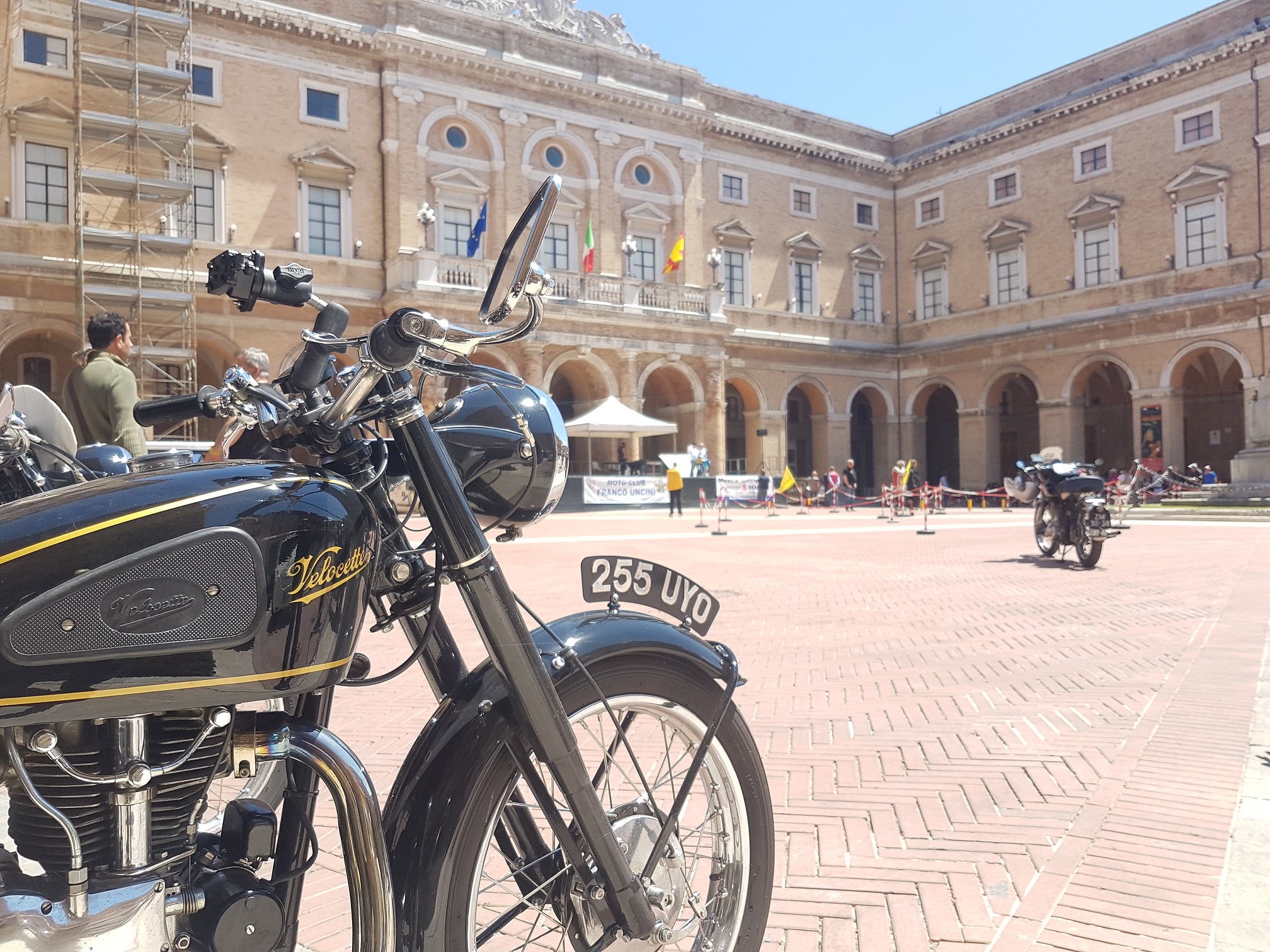 The old girl was chugging along nicely and didn't miss a beat, even in the heat and with my massive carcass sat on it going up some twisty mountain roads! The Velos certainly got some attention whenever we parked up in the towns and villages, however there was such a varied range of makes and models of bikes in the Giro, there was always plenty for people to see. I was amazed at how well some of the small Italian bike went with their riders keeping the throttle wide open for most of the day! 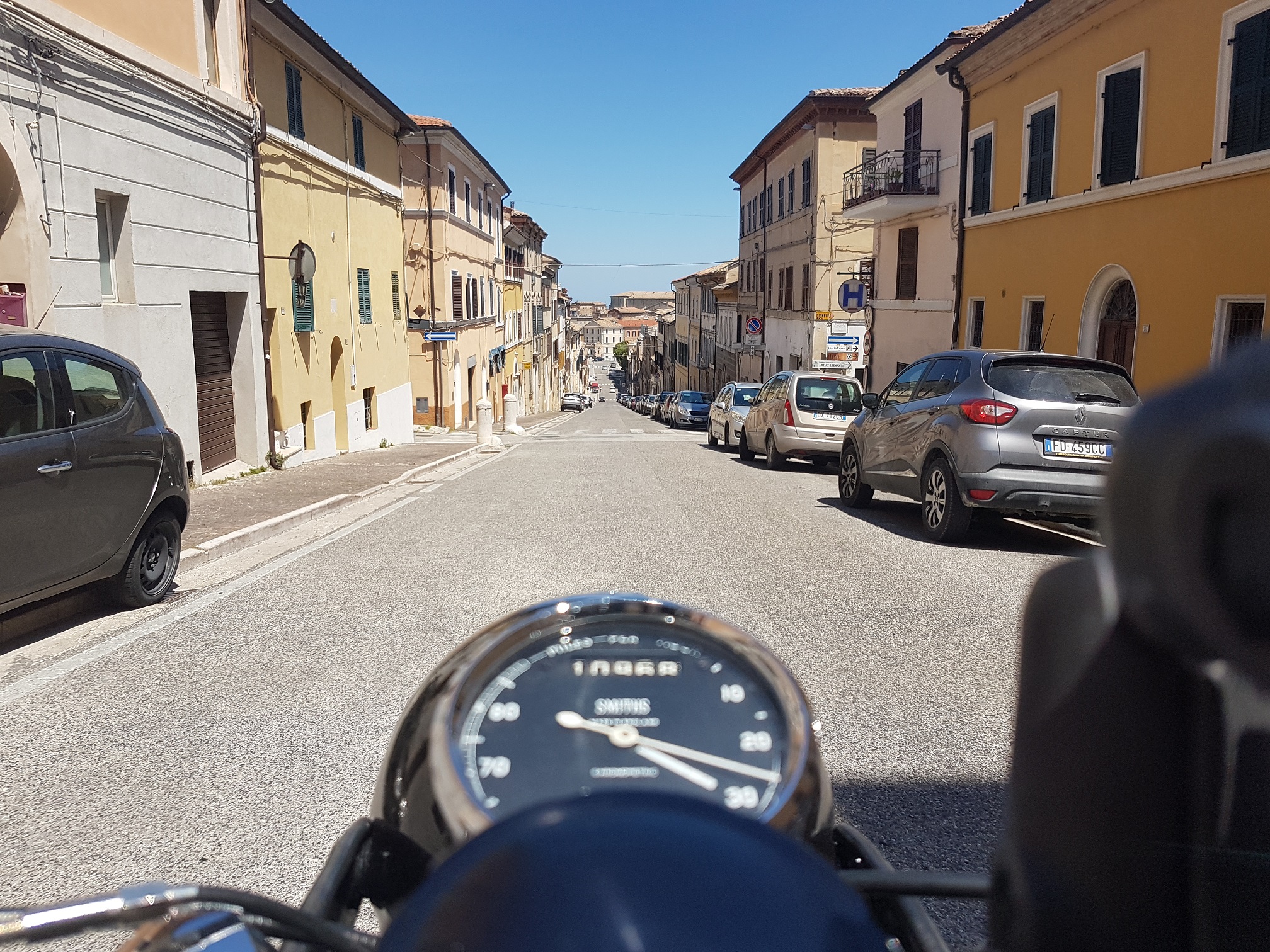 We were now heading south winding through the countryside, plenty to see along the way. Myself and Bill were getting a bit nervous towards the last 60 km as both of us were running low on fuel and had stupidly rode past the petrol station where most people had stopped to fill up, however we were delighted to see a petrol station with about 20 Km left of the days journey, so definitely stopped this time to give the MSS's a well deserved drink. 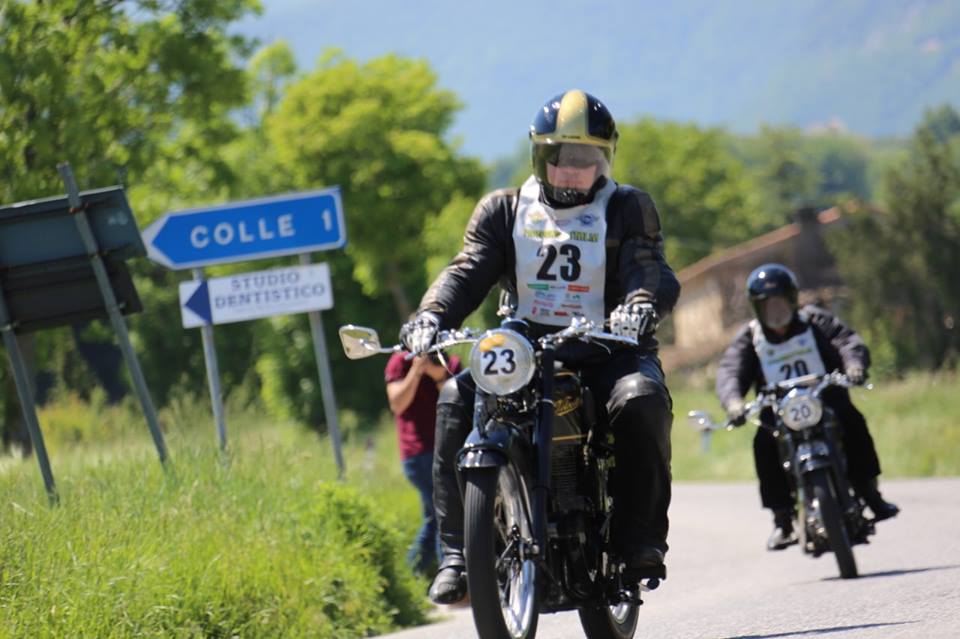 Back into San Benedetto and to the finish line on the sea front for a well needed beer and Hoyo De Monterrey Epicure Especial No3!