Things were starting ache in a morning now, I've not done this amount of miles in one trip for quite a few years now and it was starting to show when trying to bend down to put my boots on this morning! But what a ride it's been over the last week and today was a much shorter route than normal, heading back to where it all started in Spoleto. Bags packed and into reception, the usual drill checking over the Velos with the only thing required was pumping up both tyres a little. Unfortunately todays route was disrupted slightly and some of the roads we had in our list were changed due to road works, so we ended up riding in one big convoy for the first leg, along some major roads for the first time in the whole trip, which was a little boring after all the twisty mountain sections, free from other traffic but we made it to the first stop and from this point on it would be back to normal. Villa at Gubbio 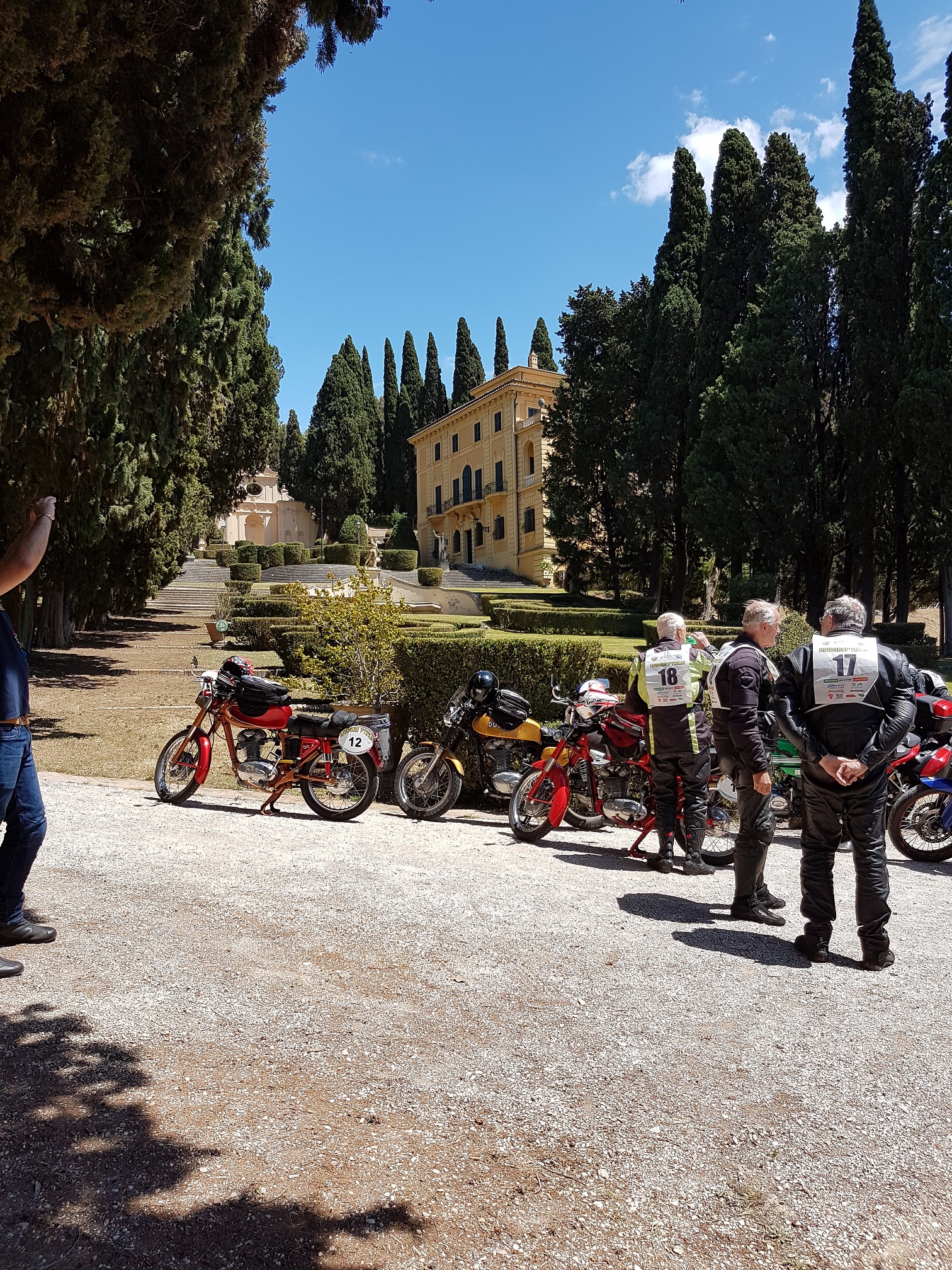 Back on the road after a walk around a magnificent Villa in Gubbio, re-hydrated and re-fooded!, we were heading south towards Spoleto, the big convoy had now broken up and we were back to riding in our own little groups, myself and Bill at our own pace which meant being over taken on the flats by all the little Italian bikes, but passing them all again on the hills due to our superior and some would say eye watering, engine power of 26 bhp! Steady away. 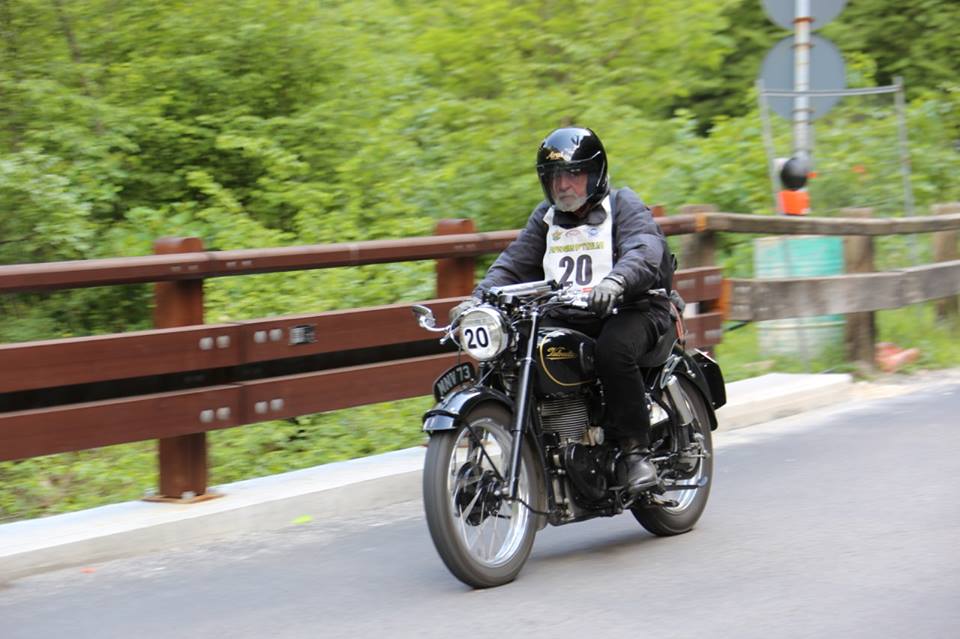 The weather was a bit hit a miss for the first time all week, not enough to stop and put full waterproofs on but just enough now and again to make things a bit slippy, unfortunately this took out a couple of riders on painted mini roundabouts, sending their machines skidding down the road. Needless to say it made everyone slow down a little, just a little! Bevagna

We were now on the final few stages of todays route with only a couple of special stages left, the bikes were once again running without any issues and the cooler weather made it easier for the old girls also. I tool 1 litre of oil with me in my rucksack in case of emergency, although I did have a 5 litre container in my suitcase, however over the whole event, I only needed to use about 350ml of oil in order to keep things at the right level in the tank, so I was most impressed with my 63 year old bike, considering it's a British bike and we all know what reputation these have for leaving oil behind! Montefalco 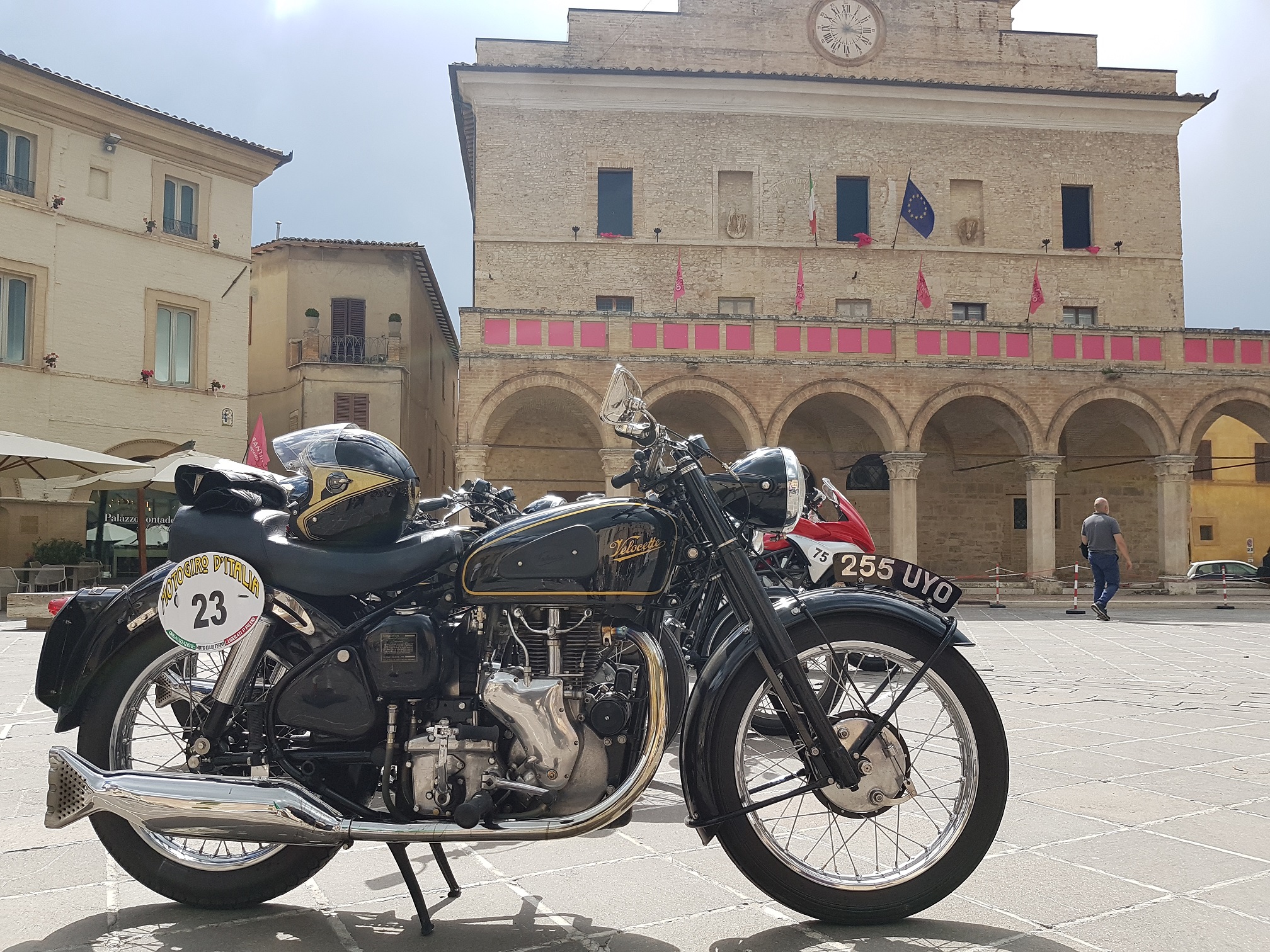 So that is about it, almost done, the last few Kms left to do as we returned to Spoleto, where we wound up through the middle of the town, through the narrow streets and into the finishing square infront of an impressive Church, there has been plenty of these over the last 6 days. Time card handed in for the final time and lined up in the next space on the red carpet laid out for all the finishers. Hand shakes all around and the final group photos taken. Just as the heavens opened and we all had to dive for cover! Spoleto Finish Line 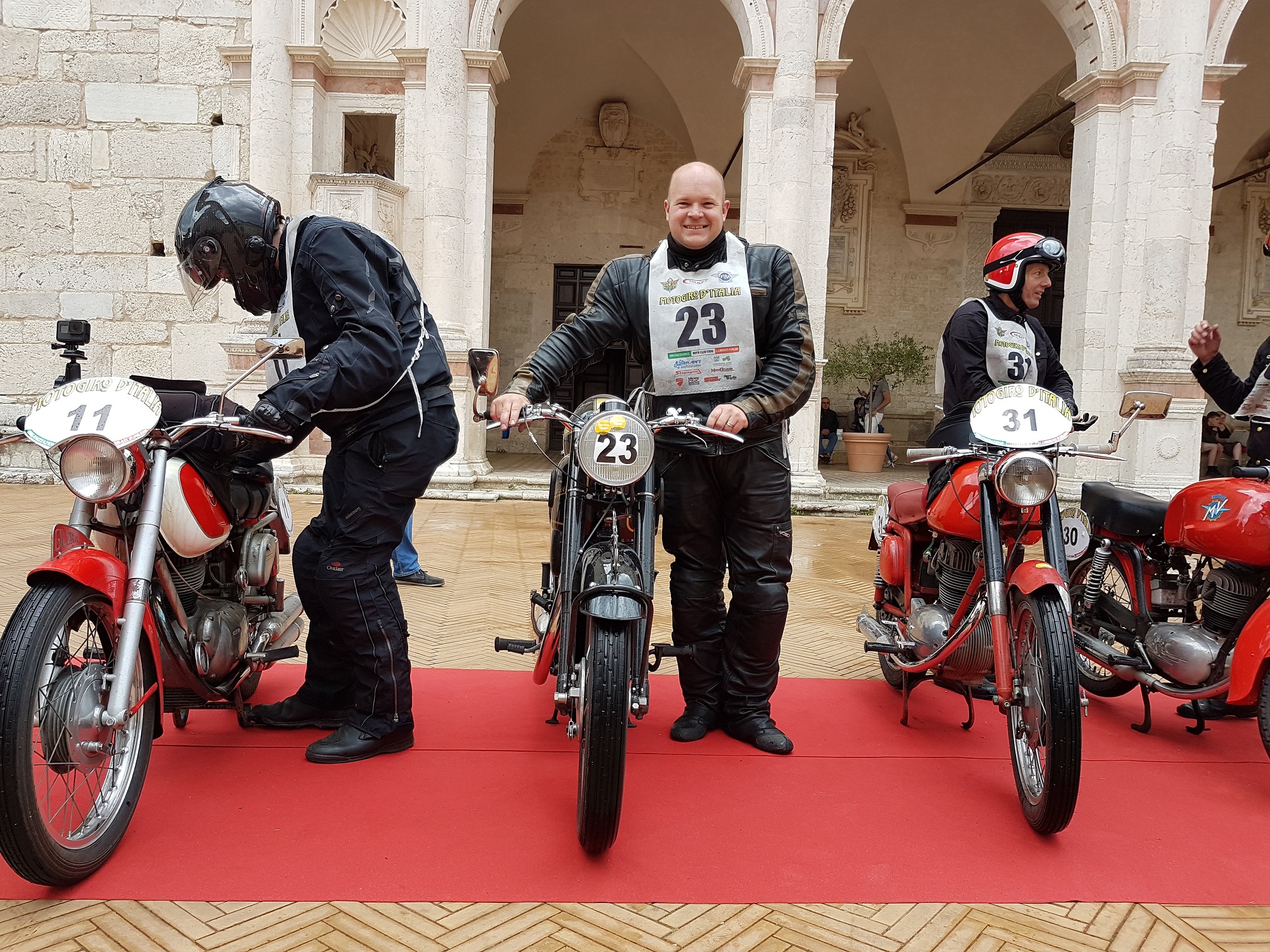 Back to the hotel to start loading the bikes back into the van, everyone exchanging war stories but you could just tell what was on most peoples minds, what were the final results! Tonight was the final evening dinner but also was presentation night for all the class winners and overall winners. So after all that, with not knowing what to do on the special stages for the first day and to be fair still not much idea by the end of the week, I had managed to come 5th in the Vintage Class, so a nice little trophy to put on the wall in the workshop. 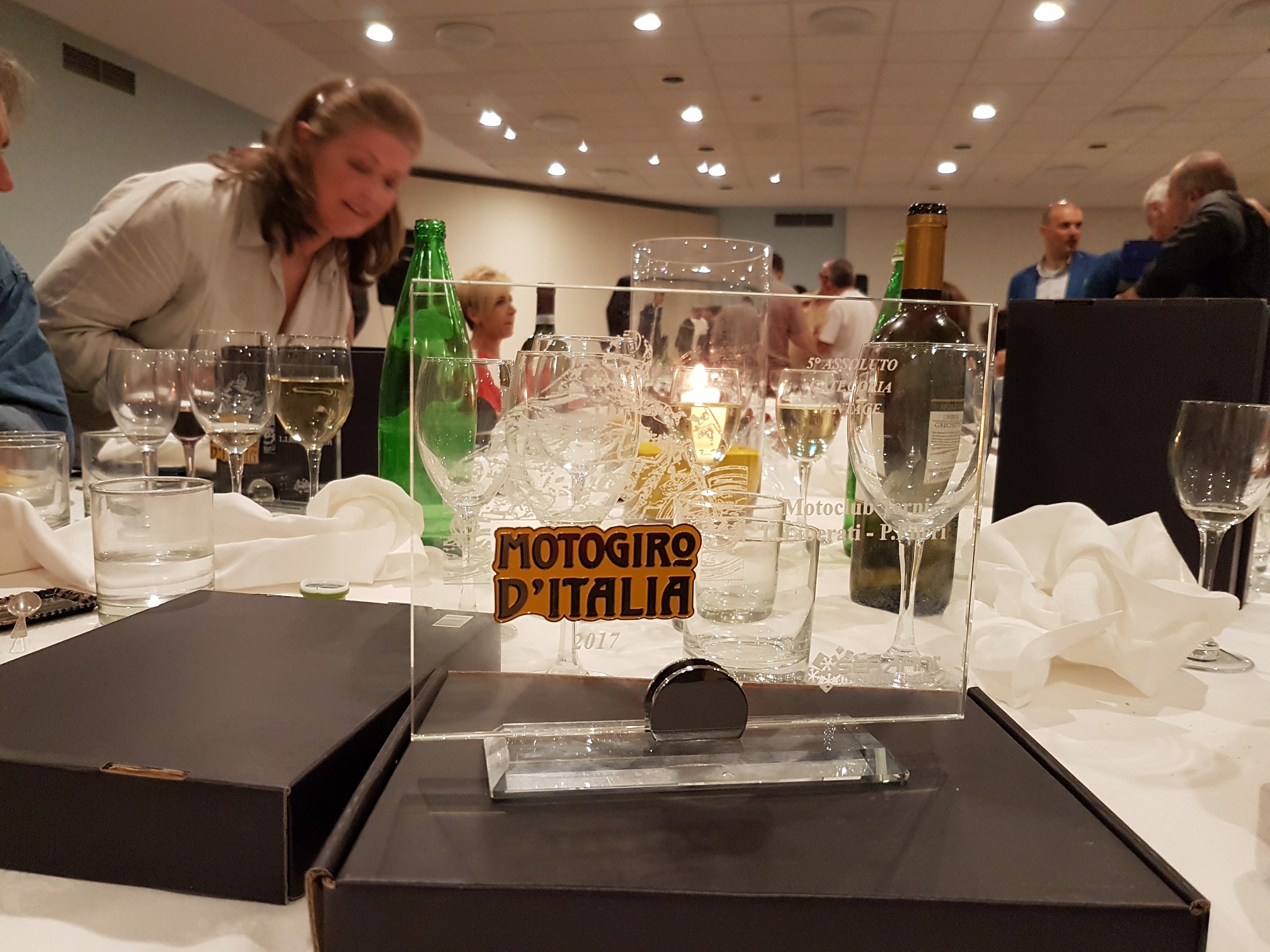 Motogiro D'Italia - Well the verdict was that I am glad Bill and I came up with the idea after several wines back in late 2016 because this was the first 'big' biking event that I have been on and it certainly didn't disappoint. Neither did the Velocette MSS's that we took, we had no major issues over the two weeks that we were riding and both just needed a good wash when we got home. I took enough spares in the van to build a third Velo as I had never been on anything like this before, but maybe that is the key to making sure that nothing goes wrong?? The roads, organisers, people, weather, scenery, locals were all amazing and really made the whole trip an unforgettable experience. If you even have a slight inkling about wanting to participate in a European bike event, then I would highly recommend the Motogiro D'Italia. A big thanks again to all the organisers.